What is Trench Warfare?

The first major trench lines were completed in late November 1914. At their peak, the trenches built by both sides extended nearly 400 miles from Nieuport, on the Belgian coast, to the Swiss border. Among the Allies, the Belgians occupied 40 miles, the British occupied 90 miles and the French occupied the rest. Experts calculate that along the western front, the Allies and Central Powers dug nearly 6,2500 miles of trenches by the end of 1914. "[the bodies] we could not get from the German wire continued to swell ... the color of the dead faces changed from white to yellow-gray, to red, to purple, to green to black." Robert Graves, poet, novelist, critic.

The Allies used four "types" of trenches. The first, the front-line trench (or firing-and-attack trench), was located from 50 yards to 1 mile from the German's front trench. Several hundred yards behind the front-line trench was the support trench, with men and supplies that could immediately assist those on the front line. The reserve trench was dug several hundred yards further back and contained men and supplies that were available in emergencies should the first trenches be overrun.

Connecting these trenches were communication trenches, which allowed movement of messages, supplies, and men among the trenches. Some underground networks connected gun emplacements and bunkers with the communication trenches. German trench life was much different. They constructed elaborate and sophisticated tunnel and trench structures, sometimes with living quarters more than 50 feet below the surface. These trenches had electricity, beds, toilets and other niceties of life that contrasted sharply with the open-air trenches of the Allies.

On average, daily losses for the British soldiers were nearly 7,000 men killed, disabled or wounded. This figure remained fairly constant throughout the war. To keep morale as high as possible and to keep the soldiers on the front as fresh as possible, the British established a three-week rotation schedule. A week in the front trench was followed by a week in the support trench, which was followed by a week in the reserve trenches. During this third week, the men could relax with sports, concerts and plays, keeping their minds away from life on the front. No man's land: The Territory Between the Trenches

By mid-November 1914, the territory between the opposing front trenches was marked with huge craters caused by the shelling; nearly all vegetation was destroyed. Whenever possible, both sides filled this land with barbed wire to slow down any rapid advances by the enemy. The machine gun and the new long-range rifles made movement in this area almost impossible.

Both sides quickly recognized that assaults against the enemy trenches were suicide if begun in broad daylight, so attacks tended to take place just before dawn or right at dawn. Poison gases tended to be more effective in the mornings, as the colder air and absence of wind allowed the gases to stay closer to the ground for longer periods of time. Except for artillery shelling, daytime was relatively safe for the soldiers on the front line. Once the sun went down, men crawled out of their trenches to conduct raids, investigate the layout of the terrain, and eavesdrop near the enemy lines to pick up information on their strengths, weakness and strategies.

Life in the Trenches

Rat Infestation
Rats in their millions infested trenches.  There were two main types, the brown and the black rat.  Both were despised but the brown rat was especially feared.  Gorging themselves on human remains (grotesquely disfiguring them by eating their eyes and liver) they could grow to the size of a cat.

Men, exasperated and afraid of these rats (which would even scamper across their faces in the dark), would attempt to rid the trenches of them by various methods: gunfire, with the bayonet, and even by clubbing them to death.

It was futile however: a single rat couple could produce up to 900 offspring in a year, spreading infection and contaminating food.  The rat problem remained for the duration of the war (although many veteran soldiers swore that rats sensed impending heavy enemy shellfire and consequently disappeared from view).

Frogs, Lice and Worse
Rats were by no means the only source of infection and nuisance.  Lice were a never-ending problem, breeding in the seams of filthy clothing and causing men to itch unceasingly.

Even when clothing was periodically washed and deloused, lice eggs invariably remained hidden in the seams; within a few hours of the clothes being re-worn the body heat generated would cause the eggs to hatch.

Lice caused Trench Fever, a particularly painful disease that began suddenly with severe pain followed by high fever.  Recovery - away from the trenches - took up to twelve weeks.  Lice were not actually identified as the culprit of Trench Fever until 1918.

Frogs by the score were found in shell holes covered in water; they were also found in the base of trenches.  Slugs and horned beetles crowded the sides of the trench.

Many men chose to shave their heads entirely to avoid another prevalent scourge.

Trench Foot was another medical condition peculiar to trench life.  It was a fungal infection of the feet caused by cold, wet and unsanitary trench conditions.  It could turn gangrenous and result in amputation.  Trench Foot was more of a problem at the start of trench warfare; as conditions improved in 1915 it rapidly faded, although a trickle of cases continued throughout the war.

Daily Boredom
Given that each side's front line was constantly under watch by snipers and look-outs during daylight, movement was logically restricted until night fell.  Thus, once men had concluded their assigned tasks they were free to attend to more personal matters, such as the reading and writing of letters home.

Meals were also prepared.  Sleep was snatched wherever possible - although it was seldom that men were allowed sufficient time to grab more than a few minutes rest before they were detailed to another task.

...And the Smell
Finally, no overview of trench life can avoid the aspect that instantly struck visitors to the lines: the appalling reek given off by numerous conflicting sources.

Rotting carcases lay around in their thousands.  For example, approximately 200,000 men were killed on the Somme battlefields, many of which lay in shallow graves.

Overflowing latrines would similarly give off a most offensive stench.

Men who had not been afforded the luxury of a bath in weeks or months would offer the pervading odor of dried sweat.  The feet were generally accepted to give off the worst odor.

Trenches would also smell of creosol or chloride of lime, used to stave off the constant threat of disease and infection.

Add to this the smell of cordite, the lingering odor of poison gas, rotting sandbags, stagnant mud, cigarette smoke and cooking food... yet men grew used to it, while it thoroughly overcame first-time visitors to the front.

When the spring of 1915 was reached, the ideas of the generals of the British and French were simple.  Somehow, break through the enemy’s line of trenches, secure that position and send many troops through that gap, when a war of movement will return.  The allies believed they could win a war of movement, the problem was how to achieve a breakthrough?  After a few unsuccessful attacks, the allied commanders devised a new plan, a war of attrition.  The idea now was to kill as many Germans as possible, until they run out of men.  Whether the British or French took heavy casualties was irrelevant, as long as the Germans ran out of men first.  A breakthrough was not so important now, attacks to gain ground became the priority and this was to be achieved by capturing the frontline of an enemy trench, using the following plan.  A heavy artillery bombardment would go on for days, supposedly destroying all resistance.  Then British soldiers would march unopposed across no-mans-land (the wasteland between the front line trenches of the two sides) and capture the front line enemy trench and possibly the trenches behind it.

This diagram shows what was supposed to happen… However the reality (shown below) was somewhat different.

One the reasons this plan failed most of the time, was because the defenses of the German trenches were far better than the British had anticipated.  Also any element of surprise was lost, because the German planes could see troops being gathered and the first artillery fire signaled the start of the attack.  When the shelling stopped, the Germans would come out of their underground concrete bunkers and be ready for the British, who were held up anyway by the barbed wire, which hadn’t been destroyed.  The problems the British faced are shown below.

One of the worst problems that faced attacking troops, was the mud of no-mans-land.  Even without guns or horses, the mud was still very hard to cross. 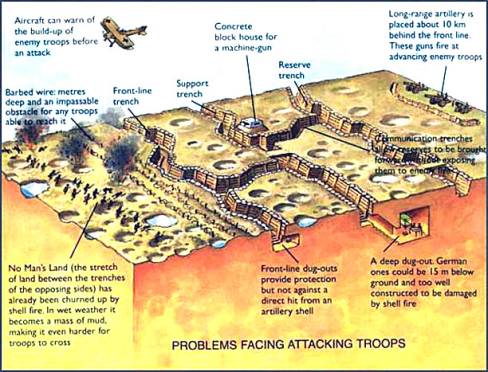 As we have seen, British offensive troops faced many problems, which caused high casualties.  Also, well-defended German trenches and mud in no-mans-land took many lives.
Proudly powered by Weebly