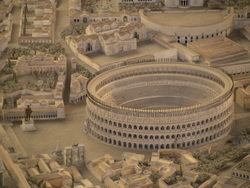 Beginning in the eighth century B.C., Ancient Rome grew from a small town on central Italy's Tiber River into an empire that at its peak encompassed most of continental Europe, Britain, much of western Asia, northern Africa and the Mediterranean islands. Among the many legacies of Roman dominance are the widespread use of the Romance languages (Italian, French, Spanish, Portuguese and Romanian) derived from Latin, the modern Western alphabet and calendar and the emergence of Christianity as a major world religion. After 450 years as a republic, Rome became an empire in the wake of Julius Caesar's rise and fall in the first century B.C. The long and triumphant reign of its first emperor, Augustus, began a golden age of peace and prosperity; by contrast, the empire's decline and fall by the fifth century A.D. was one of the most dramatic implosions in the history of human civilization.


As legend has it, Rome was founded by Romulus and Remus, twin sons of Mars, the god of war. Left to drown in a basket on the Tiber by a king of nearby Alba Longa and rescued by a she-wolf, the twins lived to defeat that king and found their own city on the river's banks in 753 B.C. After killing his brother, Romulus became the first king of Rome, which is named for him. A line of Sabine, Latin and Etruscan (earlier Italian civilizations) kings followed in a non-hereditary succession.

Rome's era as a monarchy ended in 509 B.C. with the overthrow of its seventh king, Lucius Tarquinius Superbus, whom ancient historians portrayed as cruel and tyrannical, compared to his benevolent predecessors. A popular uprising was said to have arisen over the rape of a virtuous noblewoman, Lucretia, by the king's son. Whatever the cause, Rome turned from a monarchy into a republic, a world derived from res publica, or "property of the people."


The power of the monarch passed to two annually elected magistrates called consuls; they also served as commanders in chief of the army. The magistrates, though elected by the people, were drawn largely from the Senate, which was dominated by the patricians, or the descendants of the original senators from the time of Romulus. Politics in the early republic was marked by the long struggle between patricians and plebeians (the common people), who eventually attained some political power through years of concessions from patricians, including their own political bodies, the tribunes, which could initiate or veto legislation.

In 450 B.C., the first Roman law code was inscribed on 12 bronze tablets–known as the Twelve Tables–and publicly displayed in the Roman Forum. These laws included issues of legal procedure, civil rights and property rights and provided the basis for all future Roman civil law. By around 300 B.C., real political power in Rome was centered in the Senate, which at the time included only members of patrician and wealthy plebeian families.