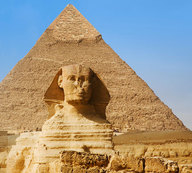 For almost 30 centuries—from its unification around 3100 B.C. to its conquest by Alexander the Great in 332 B.C.—ancient Egypt was the preeminent civilization in the Mediterranean world. From the great pyramids of the Old Kingdom through the military conquests of the New Kingdom, Egypt's majesty has long entranced archaeologists and historians and created a vibrant field of study all its own: Egyptology. The main sources of information about ancient Egypt are the many monuments, objects and artifacts that have been recovered from archaeological sites, covered with hieroglyphs that have only recently been deciphered. The picture that emerges is of a culture with few equals in the beauty of its art, the accomplishment of its architecture or the richness of its religious traditions.

Predynastic Period (c. 5000-3100 B.C.)Few written records or artifacts have been found from the Predynastic Period, which encompassed at least 2,000 years of gradual development of the Egyptian civilization.

Neolithic (late Stone Age) communities in northeastern Africa exchanged hunting for agriculture and made early advances that paved the way for the later development of Egyptian arts and crafts, technology, politics and religion (including a great reverence for the dead and possibly a belief in life after death).

Around 3400 B.C., two separate kingdoms were established: the Red Land to the north, based in the Nile River Delta and extending along the Nile perhaps to Atfih; and the White Land in the south, stretching from Atfih to Gebel es-Silsila. A southern king, Scorpion, made the first attempts to conquer the northern kingdom around 3200 B.C. A century later, King Menes would subdue the north and unify the country, becoming the first king of the first dynasty.

Archaic (Early Dynastic) Period (c. 3100-2686 B.C.)King Menes founded the capital of ancient Egypt at White Walls (later known as Memphis), in the north, near the apex of the Nile River delta. The capital would grow into a great metropolis that dominated Egyptian society during the Old Kingdom period. The Archaic Period saw the development of the foundations of Egyptian society, including the all-important ideology of kingship. To the ancient Egyptians, the king was a godlike being, closely identified with the all-powerful god Horus. The earliest known hieroglyphic writing also dates to this period.

In the Archaic Period, as in all other periods, most ancient Egyptians were farmers living in small villages, and agriculture (largely wheat and barley) formed the economic base of the Egyptian state. The annual flooding of the great Nile River provided the necessary irrigation and fertilization each year; farmers sowed the wheat after the flooding receded and harvested it before the season of high temperatures and drought returned.

Old Kingdom: Age of the Pyramid Builders (c. 2686-2181 B.C.)The Old Kingdom began with the third dynasty of pharaohs. Around 2630 B.C., the third dynasty's King Djoser asked Imhotep, an architect, priest and healer, to design a funerary monument for him; the result was the world's first major stone building, the Step-Pyramid at Saqqara, near Memphis. Pyramid-building reached its zenith with the construction of the Great Pyramid at Giza, on the outskirts of Cairo. Built for Khufu (or Cheops, in Greek), who ruled from 2589 to 2566 B.C., the pyramid was later named by classical historians as one of the ancient world's Seven Wonders. Two other pyramids were built at Giza for Khufu's successors Khafra (2558-2532 B.C) and Menkaura (2532-2503 B.C.).

During the third and fourth dynasties, Egypt enjoyed a golden age of peace and prosperity. The pharaohs held absolute power and provided a stable central government; the kingdom faced no serious threats from abroad; and successful military campaigns in foreign countries like Nubia and Libya added to its considerable economic prosperity. Over the course of the fifth and sixth dynasties, the king's wealth was steadily depleted, partially due to the huge expense of pyramid-building, and his absolute power faltered in the face of the growing influence of the nobility and the priesthood that grew up around the sun god Ra (Re). After the death of the sixth dynasty's King Pepy II, who ruled for some 94 years, the Old Kingdom period ended in chaos.

First Intermediate Period (c. 2181-2055 B.C.)On the heels of the Old Kingdom's collapse, the seventh and eighth dynasties consisted of a rapid succession of Memphis-based rulers until about 2160 B.C., when the central authority completely dissolved, leading to civil war between provincial governors. This chaotic situation was intensified by Bedouin invasions and accompanied by famine and disease.

From this era of conflict emerged two different kingdoms: A line of 17 rulers (dynasties nine and 10) based in Heracleopolis ruled Middle Egypt between Memphis and Thebes, while another family of rulers arose in Thebes to challenge Heracleopolitan power. Around 2055 B.C., the Theban prince Mentuhotep managed to topple Heracleopolis and reunited Egypt, beginning the 11th dynasty and ending the First Intermediate Period.

Middle Kingdom: 12th Dynasty (c. 2055-1786 B.C.)After the last ruler of the 11th dynasty, Mentuhotep IV, was assassinated, the throne passed to his vizier, or chief minister, who became King Amenemhet I, founder of dynasty 12. A new capital was established at It-towy, south of Memphis, while Thebes remained a great religious center. During the Middle Kingdom, Egypt once again flourished, as it had during the Old Kingdom. The 12th dynasty kings ensured the smooth succession of their line by making each successor co-regent, a custom that began with Amenemhet I.

Middle-Kingdom Egypt pursued an aggressive foreign policy, colonizing Nubia (with its rich supply of gold, ebony, ivory and other resources) and repelling the Bedouins who had infiltrated Egypt during the First Intermediate Period. The kingdom also built diplomatic and trade relations with Syria, Palestine and other countries; undertook building projects including military fortresses and mining quarries; and returned to pyramid-building in the tradition of the Old Kingdom. The Middle Kingdom reached its peak under Amenemhet III (1842-1797 B.C.); its decline began under Amenenhet IV (1798-1790 B.C.) and continued under his sister and regent, Queen Sobekneferu (1789-1786 B.C.), who was the first confirmed female ruler of Egypt and the last ruler of the 12th dynasty.